It’s gonna be a long one.

So when I moved into this place, one of the nice things was that there was a semi-finished shed that I thought would be good to use for growing mushrooms. It’s about 100 sq ft, give or take. Not insulated, but the walls weren’t covered so that would be easy enough. Locking door, hose bib nearby, pretty much ideal. Even a covered area for materials storage.

Problem is, previous owner went and did something silly like use it as a workshop. There was also no power to the shed, so trenches were dug and power was run. I have one 15A circuit out there to use for EVERYTHING, so I gotta save on watts here and there. 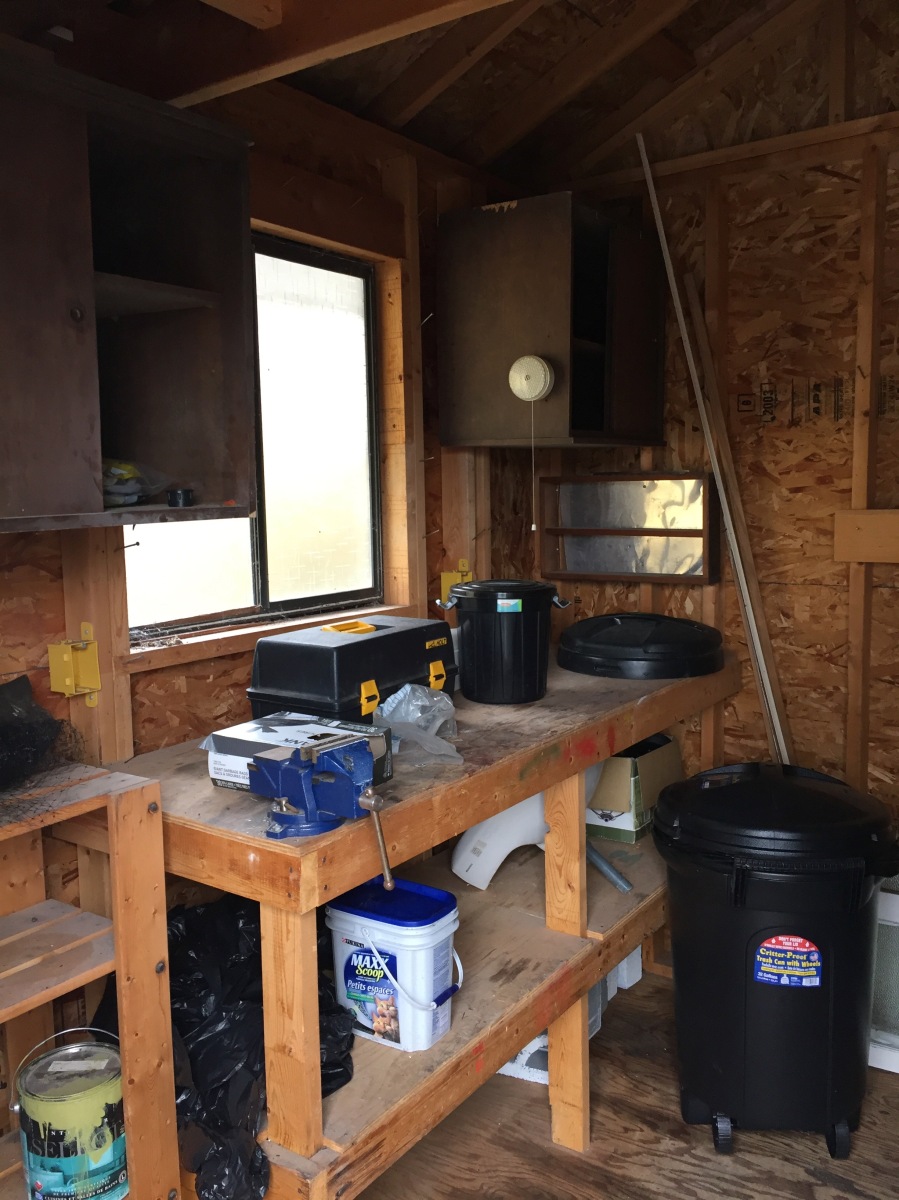 Well, that’s gonna have to come out. Originally the plan was to construct a huge greenhouse inside the shed, almost the exact dimensions as the interior, and do it that way, but that started proving to be impractical pretty quickly, so I decided to just make the shed as moisture resistant as possible with what I had / could afford.

After months of procrastinating and wasting my time on useless stuff, I actually got started on the insulating and vapor barrier. I used Roxul stone wool insulation, because it’s easy to work with, has a decent R value, and mushrooms can’t eat it.

That’s when I found out the stud centers were… well, not random, but a decently wide range between 14 and 25 inches. Anyways, insulation went up, walls and roof. I think I went through 4 or 5 packages of insulation. Bare wood floor up on patio blocks, so there’s not much I can do about that, but it’s not too cold. There was also sort of a hayloft thing. WAS. God I love reciprocating saws.

Of course I started in the easy, accessible corner with the insulating since that damn workbench was still there. I did need to get to that eventually but looked VERY sturdy. Luckily, I made a new friend at the hardware store. 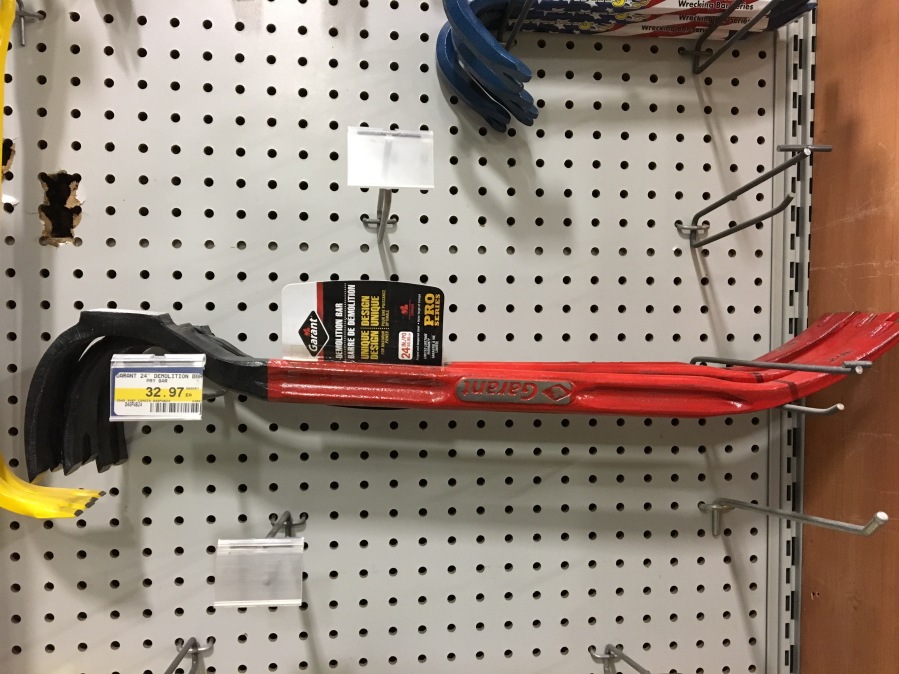 The workbench actually came out relatively easily despite a million nails. And one lag bolt in an incredibly non-obvious spot. Thanks for that, whoever built it. The cupboards and other nonsense went too, which was easy since most of them had all of two screws holding them up. Varying levels of workmanship in this shed.

This is around the time the temperature controller arrived, so I put that out there and a small fan heater set to low power (750 watts) to see what it could do. Modest results, but that’s probably because the insulation was only half done. When the insulation was finished, it was able to maintain pretty much any temperature I wanted on not all that much power. At best it was doing 30C/50F degrees above ambient (maintaining the shed at 25C/77F with an outdoor temperature of -5C/23F.) Obviously once there’s ventilation that’s gonna go down a bit, but I can live with that.

All insulated up, but still no airflow or floor. Which are sort of important things to have, I’m told. Decided to use pond liner for the floor, but then I got a bunch of fans and stuff so I started working on ventilation. Just so we’re not sucking moist air from outside through every gap in the walls from negative pressure, I put a pipe through the wall to eventually put an intake fan on the end of.

Also threw a 90 degree fitting on it to keep rain out in the meantime. For exhaust we have a 4″ extractor fan (designed for humid conditions) running through a 4 1/8″ hole in the wall to a standard pest-resistant dryer vent. If you have this motor or similar, check to make sure it’s wired how you want it. You can wire it for low power or high, mine arrived wired for low power.

Good thing I put the fan in first, it turns out. Next to go in was the pond liner. A 10×10 pre-cut piece cost like three times what it cost to get it off the giant roll, so I got a 20′ x 6′ piece and cut it in half. This allowed for a decent overlap and also for it to come about four inches up the walls on all sides, which is important so there’s fewer seams and places for water and dirt to accumulate or damage the underlying wood. 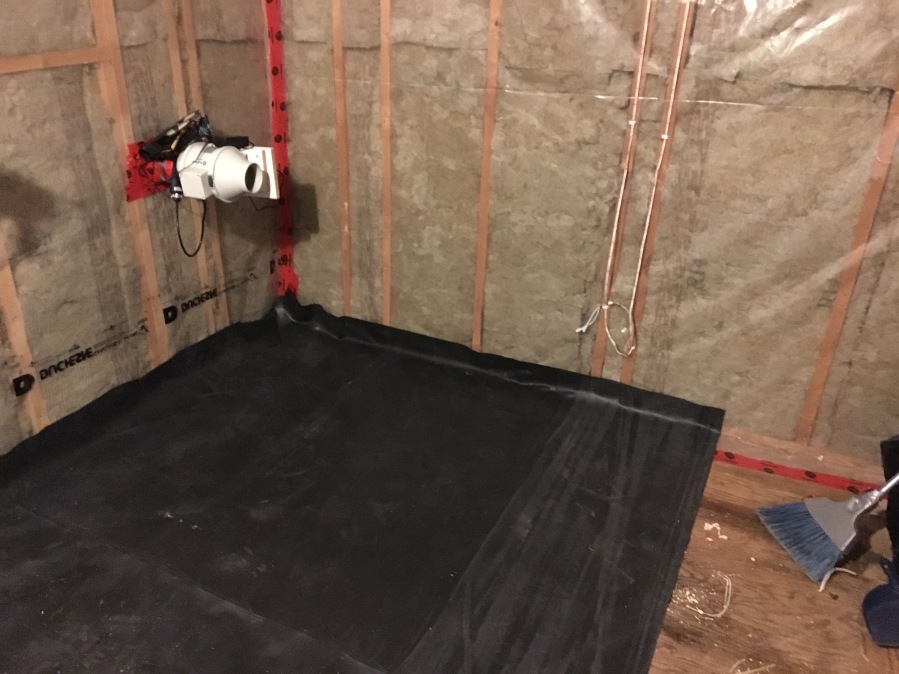 Yeah, that stuff stinks. Bad. It took like a week to offgas even with the fan running nonstop. But anyways, I am after all not using it for its intended purpose, so I guess I can’t complain. The pond liner is sealed to the floor and to the vapor barrier on the walls with Lexel. You could probably use any kind of silicone but I like this stuff because it’s flexible enough that I won’t trip over a seam and rip it up. The only seam on the floor is where the two pieces overlap, which was sealed VERY well with Lexel (then covered with sheathing tape to reduce the trip hazard.)

Lighting time! I was planning to use a decent amount of LED strips, so I got a couple beefy 30 amp 12V power supplies. 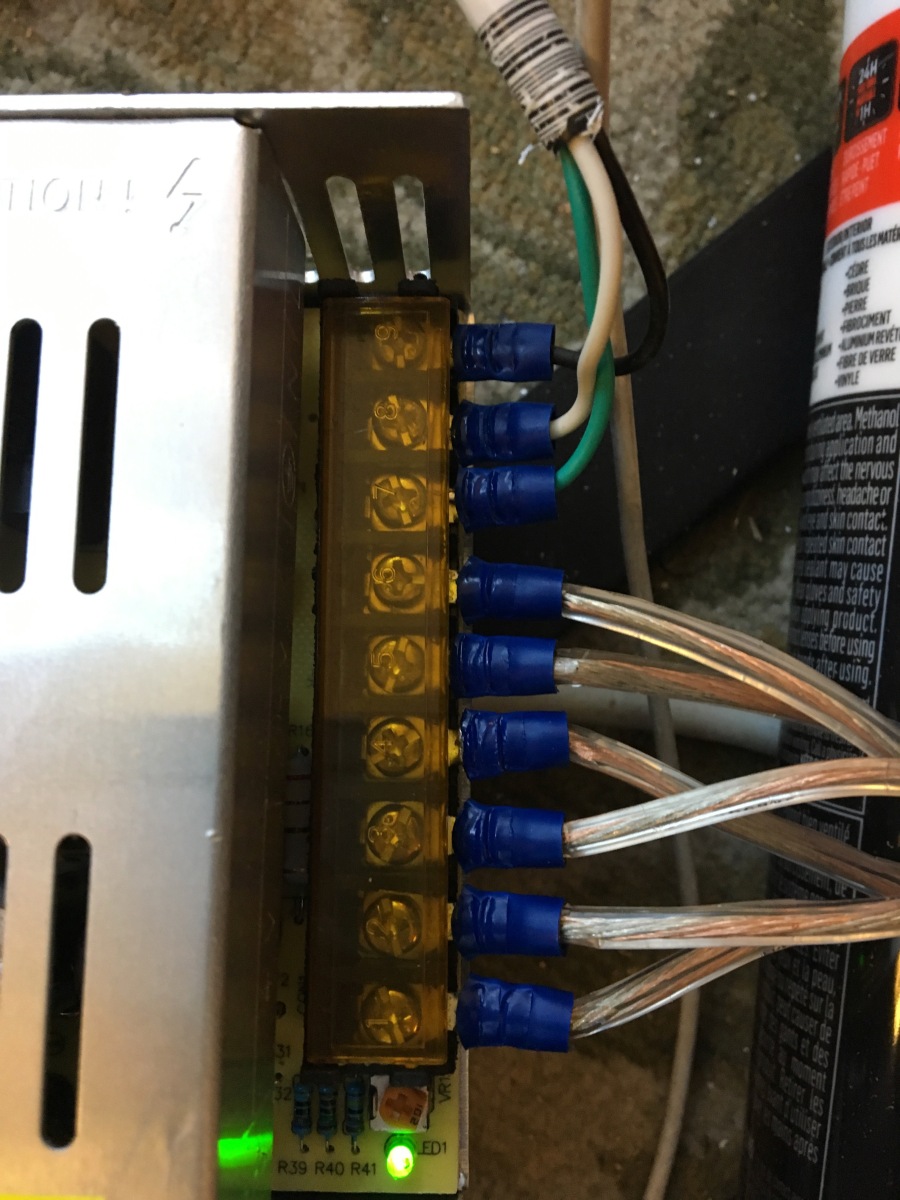 This is about 1/4 of the total lighting that’s going in. Around the walls, then under the shelves once they exist.

As of this writing there’s 4800 individual LEDs in there with that many again on the way. Three 30A power supplies. The wiring’s a bit of a nightmare, soon I’ll put in cable raceways to get all this off the floor. 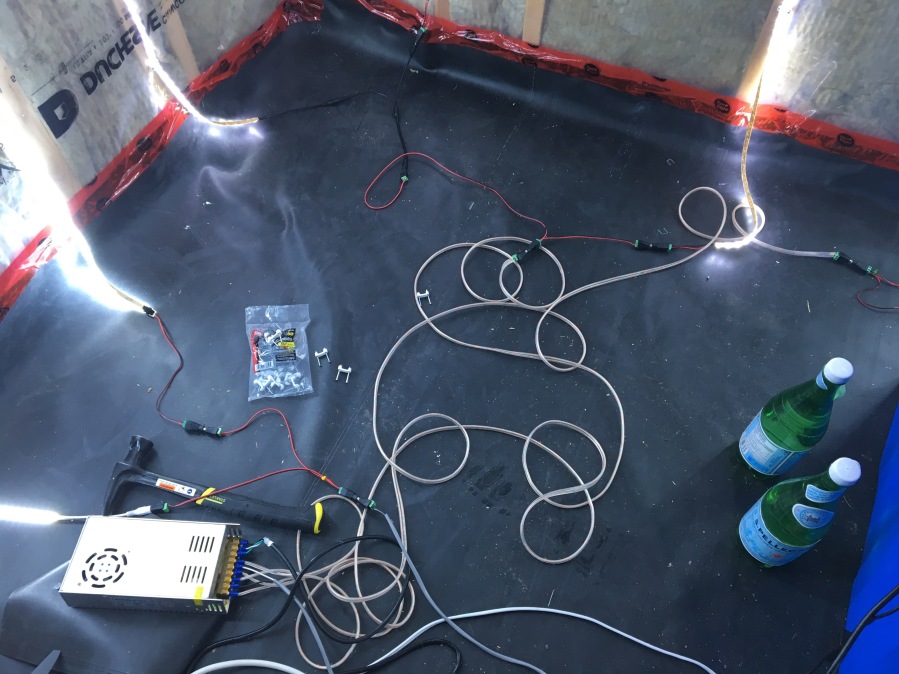 The effect is quite dramatic at night, I gotta say. Whatever, the neighbors can think what they will.

I also got the humidity started at this point. It’s just a six-head fogger in a tote with 1/3 of the lid cut off, with a fan blowing on it. The fogger float is ‘corralled’ under the covered part so it doesn’t spit water everywhere. It’ll do until I get the rest of the actual fogger design worked out.

Okay, that’s it, I’ve bored you enough. For now. Next post I’ll go over materials and supplies and a few notes about why I chose them. That’ll be a non-stop thrill ride, won’t it?

Grow Your Own Mushrooms

With our kits and our spawn, you can grow your own mushrooms even with no experience. Grain spawn can be made to order for your specific project.

Sort Of A Blog!